'Home is What You Make of It' 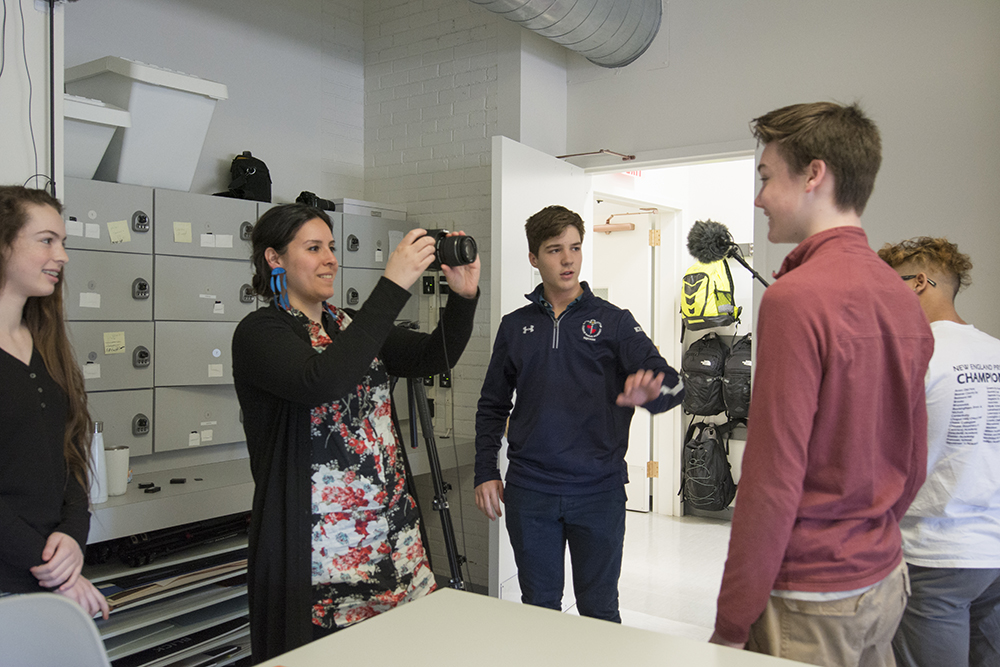 Visual Arts Teaching Fellow Sahar Al-Sawaf has an incredible story to tell. It’s so important to her that as a filmmaker and animator she is inspired to tell it again and again in different ways. But it wasn’t always a story she felt comfortable telling.

When she was six years old, Al-Sawaf came to the United States with her mother. Those details alone aren’t especially compelling, as far as the story goes, but in this case, they are critical. The pair arrived from Iraq mere days before of the start of the Persian Gulf War.

Born in Saudi Arabia to Iraqi parents, she lived in Lebanon when she was very young. But as bullets and missiles landed around her grandmother’s apartment building with increasing frequency, it became too dangerous to stay. They fled to Iraq to live with family there, but once again it became too dangerous to stay. It was 1990, and war was looming.

When Al-Sawaf and her mother arrived in California, they spoke very little English. She was placed into ESL classes, and soon found herself successfully pulling off a California accent, complete with too many “likes” and “awesomes,” she joked.

She learned to talk and dress like an American with the intent of assimilating into her new culture as quietly, seamlessly as possible. Other Arab students in her school seemed to be taking this approach too: they had an unspoken agreement that they would not use their native language.

“I wanted to truly erase my immigrant voice — to conceal my true identity,” she explained. “It is alarming to look at the news and constantly see my home country of Iraq being destroyed and redacted from history. My background is not something I feel safe shouting out to the entire world.”

Even now, years later, and on the other side of the country, she is at times uneasy talking about where she is from. “When I tell them I am from Iraq, the conversation screeches to a halt and the subject is immediately changed,” she said.

And from the Iraqi side, she is sometimes seen as “avant-garde.” While she respects her culture and observes many of its traditions, there are also ways in which her life has branched from tradition, and not everyone she encounters is comfortable with that.

It isn’t that Al-Sawaf is ashamed of where she’s from; she is extremely proud of her rich cultural heritage. She just wants to change the conversation. She wants to fill the void of understanding that she senses whenever she answers that question: Where are you from?

That’s where her work comes in. “I make films, paintings, drawings, photographs, textiles — all very different media — but they come together to represent who I am,” she said.

But that’s not the whole story. It is just as important for her to create ways for people from varied experiences to discover common ground. “Making that connection with each other, that is what’s most important to me. Especially with my students, my goal is to show them other people around the world who are going through the same things they are,” she said.

Her work also allows her to positively depict areas of the world that are frequently mischaracterized. In her experience, Middle Eastern countries face this problem frequently. “My work has allowed me to shed insight into this often misunderstood and opaquely veiled world.”

As a result, her films tend to center on the Middle East. By focusing on these conflict-laden areas she finds a way to act as a sort of mediator. She can depict aspects of innocent daily life — the stuff you don’t see on the evening news — like the foods they eat, their furniture, or where they shop. She can also point to the extremes — from dinner with a royal Dubai family to a meal shared with Iraqi refugees in Jordan atop a pile of newspapers on the floor.

In the latter example, the meal was delectable — kabobs, eggplant, even a little Sprite — but far too extravagant for the resources of a single mother with five children. And yet, Al-Sawaf explained, it was so important that she eat the meal, even if (she guessed) it was the only food they’d have for the rest of the week. For the woman, it was more important in that moment — despite her decrepit surroundings and refugee status — to feel like a perfect hostess.

“People still have that sense of community and values despite the fact that they don’t have anything,” Al-Sawaf said. “You realize that people who are struggling like that, for a moment they want to feel what it’s like to be normal.”

“It always goes back to those experiences of being young, a stranger in a new land, not having anything, and the added struggles of growing up. It really affects me,” she said. In the U.S. she had many good teachers, but she also had some really tough experiences in school for a variety of reasons: lack of financial status, celebrating different holidays, different dietary restrictions. “I know what it’s like to be an outsider. I don’t want another student to feel like that. I want them to know that it’s OK if you feel different things and do things that are not the norm within the community.”

Now living with her husband on the East Coast, Al-Sawaf said her travels throughout the Middle East, Africa and Europe have taught her something important: “I accept my home anywhere in the world. I think your home is what you make of it.”