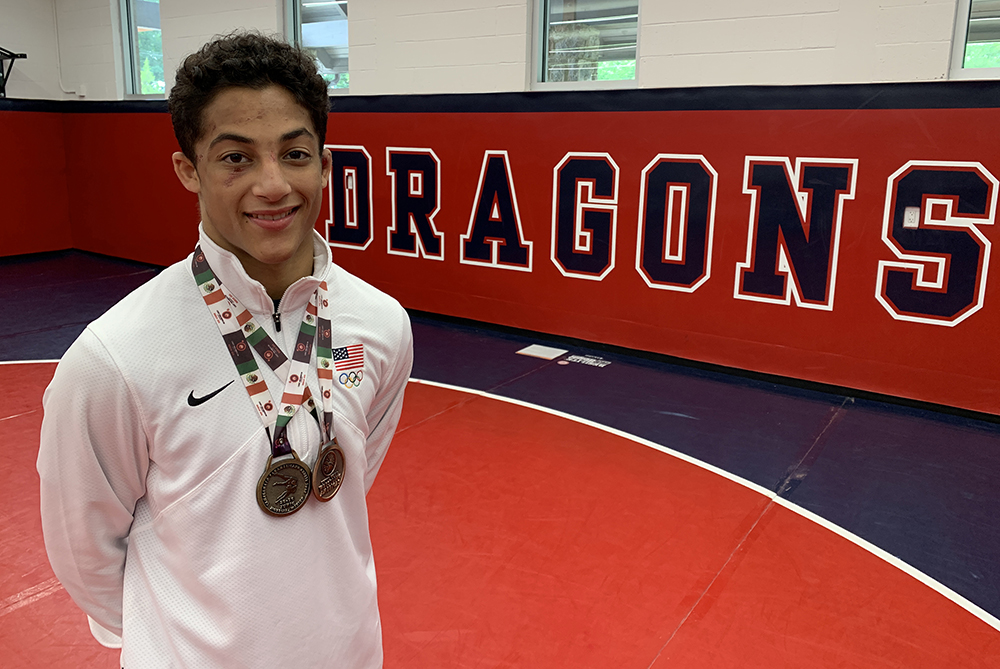 It didn’t take long for Nico Provo to realize the magnitude of the moment.

The rising junior at Greens Farms Academy was in Mexico for a wrestling competition, the 2019 United World Wrestling Cadet Pan American championships.

When the 16-year-old Stratford resident pulled on his singlet to compete, the three letters on the front reminded Provo who he was representing.

“It was a crazy opportunity,” Provo said earlier this week, the day after getting back from the competition. “It was humbling. I knew I’d be representing the country, but when you’re doing it that singlet on, you’re not doing it just for you. You realize you’re out there for the whole the country.”

Provo, along with the rest of Team USA, shined brightly, too.

After opening the competition with a loss in his first Greco-Roman match, Provo bounced back to take the bronze medal in that discipline.

Then, competing at 51 kilograms (112.4 pounds) in freestyle, Provo swept his way to the gold medal—including a win over the wrestler who beat him the opening match of the event.

“It motivated me more,” Provo said of the opening loss. “My goal was to win two gold medals and when that’s taken from you, you go to the next best thing.”

Provo knew he was stronger in freestyle, so after earning the bronze medal, he carried that momentum over into the freestyle.

“I love freestyle,” he said. “I knew I’d go out there and win. I didn’t pay attention to who I had. I just went out there and got the job done. Keep wrestling, keep going.”

He sees Provo succeed every day in the wrestling room.

“He has excellent focus and outstanding talent, but he also works really hard,” Conroy said. “He lives the right lifestyle out of season and he listens to his coaches. He’s going to do even more special things.”

The most special part of winning a gold medal was getting to stand upon the podium while your country’s anthem plays, Provo said.

It was Provo’s first international competition and he learned a lot from his successful run.

Provo’s performance also got him noticed amongst the coaches for USA Wrestling, who have invited him back to Colorado Springs to help the world team train for the upcoming world championships.

In other words, Provo is on their radar for a bright future.

“He’s been capable for a while,” Conroy said. “Now everybody is seeing what we see in the room. We’ve watched him do some really special things and now other people are seeing what we’ve always seen. He can make a world championship team. That’s a goal going forward.”

Provo said he would like to give his medals to GFA in honor of everything that school has done for him over the last two years.

“I just want to give back to my school,” he said. “The school does so many things for me, I can’t even name them. I wouldn’t be here without this school. Everybody here is amazing.”

The fact the school now has international gold medal winner on its roster is pretty amazing, too.